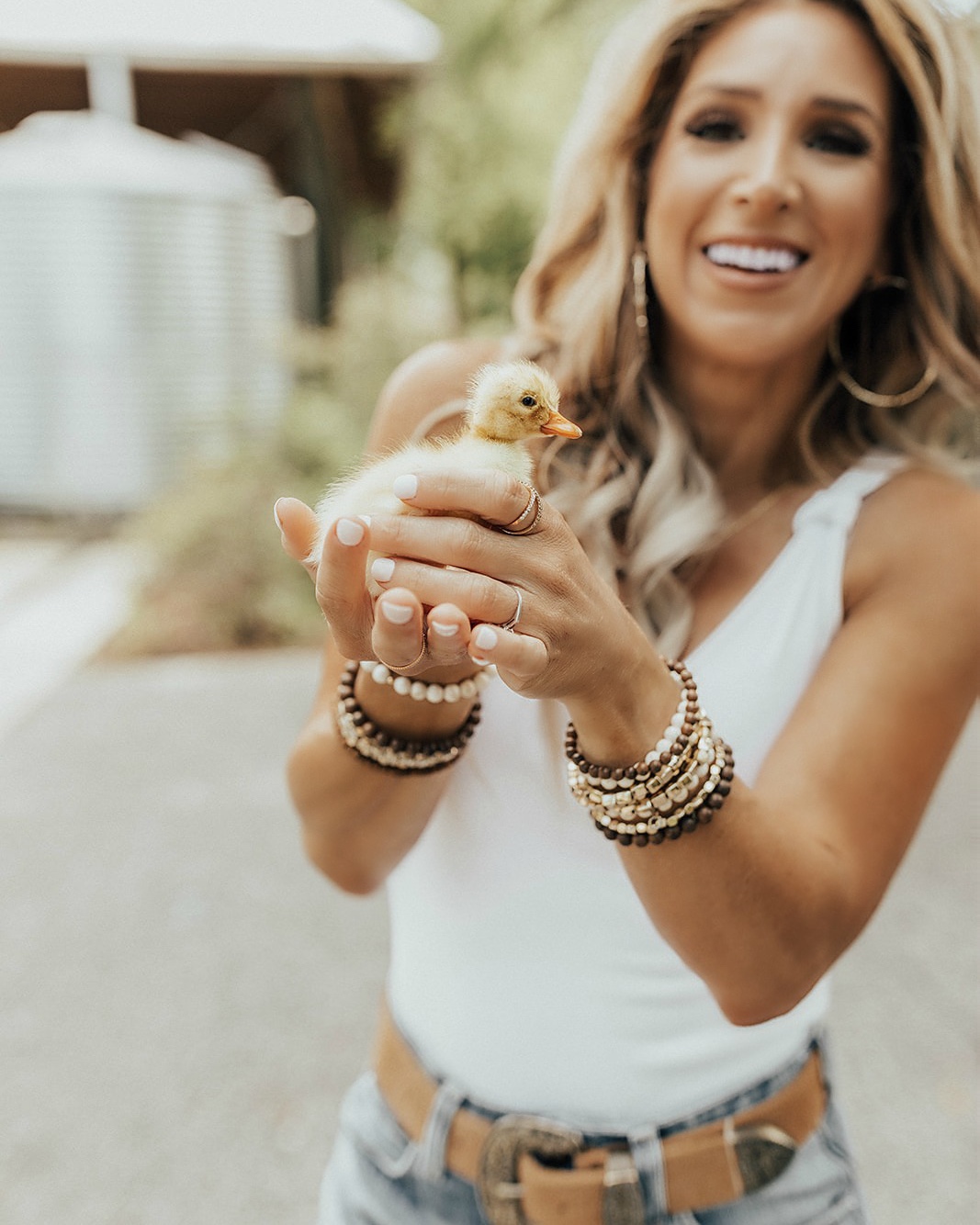 This post has been on my list for a while now. I’ve gotten many questions over the past several months over on my Instagram stories about how Tilly and the twins came to be our pets, so to speak. So before the details and timelines start to become any more hazy, here’s how I became an unexpected duck mom for you guys. But what I want to say first is this….God knows exactly what we need before we do. He knew I’d need this sweet animal in my life to love on during a difficult season. The way He orchestrates things for our good fills me with so much gratitude.

Pete pointed out to me one day in April that one of the neighborhood ducks had laid her eggs under a tree in our front yard. (You gotta keep in mind that this was at the very start of Covid-19 and all the sudden quarantining, so it was major excitement around here to find those initial eggs.) We didn’t touch them for fear the mom would abandon the nest. It just became a daily watching game to see her sitting in the nest and dropping off an egg at a time. She would lay them and then head on back to the pond just down the street.

I would watch with so much excitement each day to get a tally and share with you guys over on my stories. I loved how much you all enjoyed watching the process too. We were on Chick Watch journey together and loving a distraction from all the Covid-19 gloom and doom on the news and in our respective cities. (FYI….you can still view lots of those early days stories over in my Instagram Highlights section) 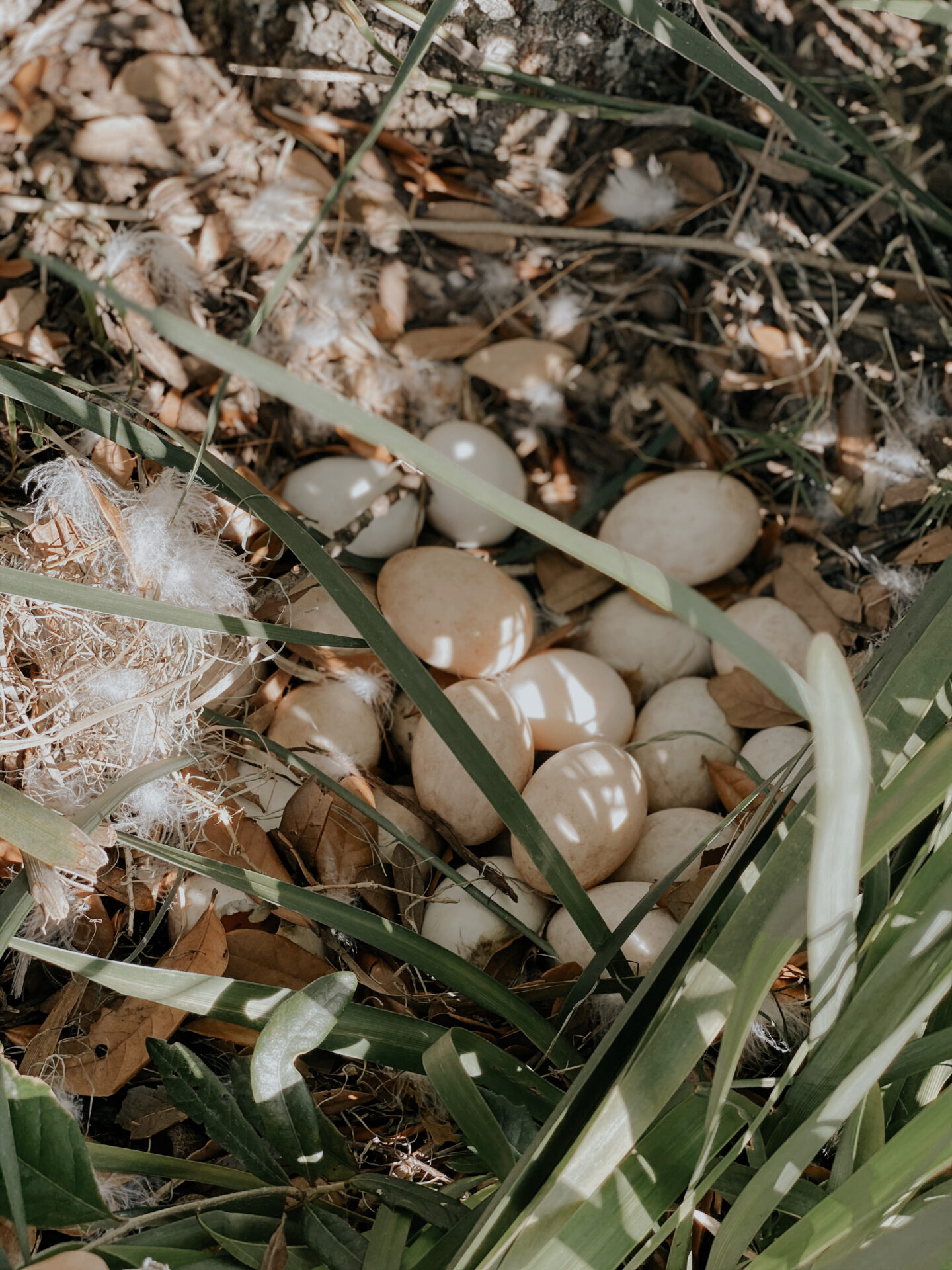 May came and we started noticing that the momma duck would start spending stretches of days sitting on her nest of eggs. Every morning, every afternoon, every early evening, we’d see her out there diligently tending to her eggs. I felt like the world’s silliest cheerleader beaming at her with pride every day. Ha! Ya’ll, I was so proud of that momma duck.

One morning as Pete was leaving for work, he dashed back into the house! He woke me up to let me know that the momma duck had been attacked and killed by something and it was laying in the neighbor’s yard next door. I ran out there, pajamas and all, and saw the saddest sight. It legit looked like a duck murder scene in the front yard. White feathers and blood all over the place. That poor momma must have been taking care of her eggs and something from the nearby woods got a hold of her.

Of the 23 eggs we had last counted, I think there were only 13 left. Whatever got the momma must have snatched some of her eggs too. To say that I was a bit heartbroken feels kind of silly, but, ya’ll, I had been cheering this mom and her babies on for a few weeks now, day after day.

So, after going back and forth over what to do with the remaining eggs and knowing that time was of the essence to give the baby chicks in those eggs the best chance at hatching, I decided I wanted to try to do it myself. Now, I had no idea what “it” was in terms of hatching these critters, but I felt invested and wanted to try to bring at least one of that momma’s babies into the world. (I’m just a sappy romantic dreamer, what can I say? Ha!)

I initially borrowed a heating lamp from one of my very sweet local followers, numbered each of the eggs and then put them in a basket and hoped for the best. I think I left them like this for a day or so. And as Pete so often does for me, he offered to help by picking up an incubator from the local Tractor Supply store (until Tilly, I had no idea we even had one of these around here). So one by one, they went into the incubator and I turned them regularly, as I learned from my crash course duck hatching research. Newby on the newbiest level, you guys. No idea what I was doing.

I kept checking on them to see how they were doing over the next couple of weeks. After candling each of them daily and not seeing many signs of life or the veining that’s supposed to take place, the bunch dwindled down to 4.

And then all I was left with was the one. One out of 23 eggs were still viable. Yall. I was low key freaking out over this situation. I felt so responsible for the outcome.

Day after day, I kept an eye on that one lonely egg in there. I was hopeful, but not convinced AT ALL that it would hatch. 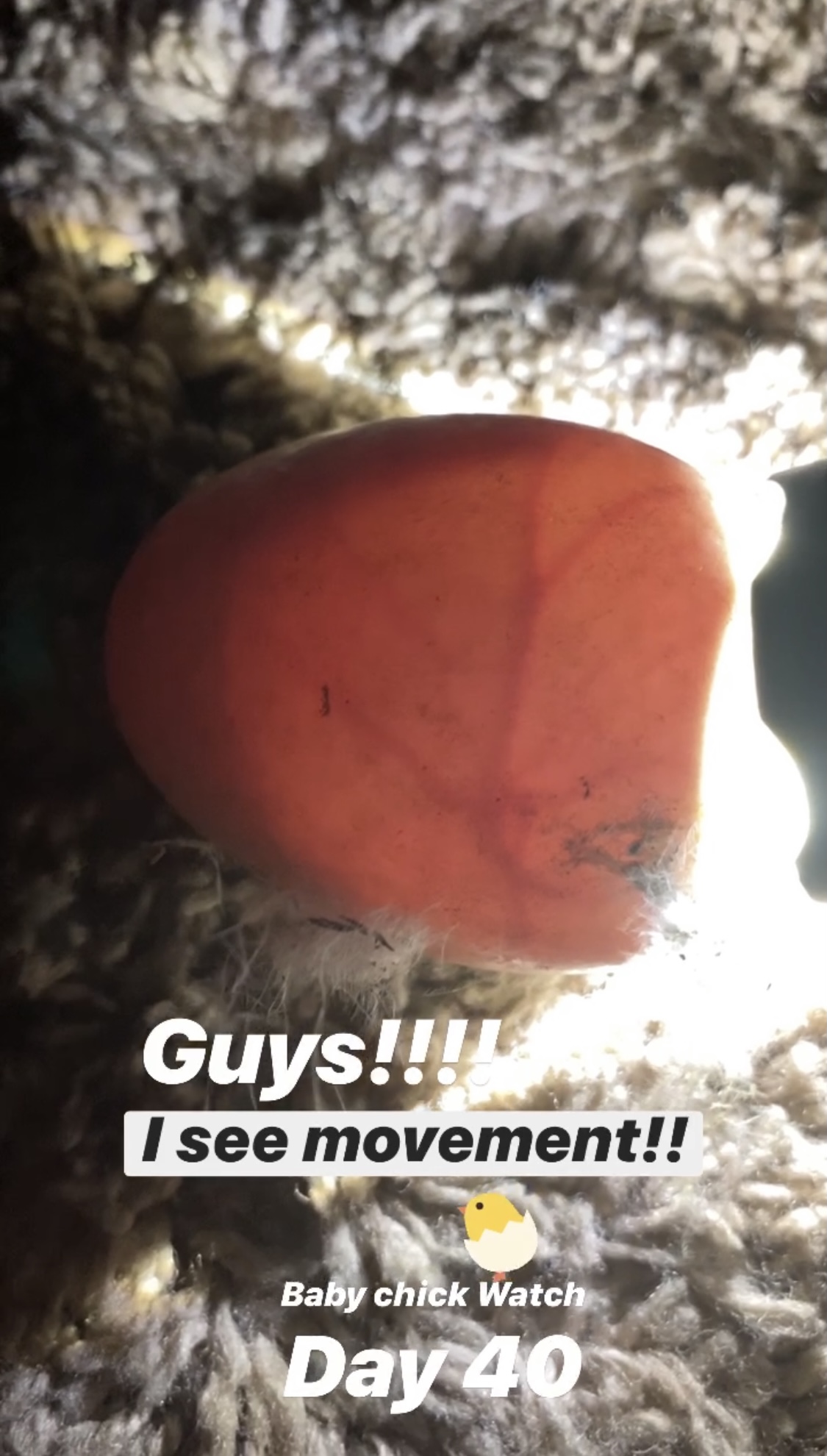 At 12:23pm on May 27, out came little Miss Tilly from that egg, yall! I can honestly say that I’ve not felt that much pure JOY in quite a long time. To watch her work her way out of that shell over the next several hours was incredibly rewarding and I felt like I had given birth to my third child! lol

She was tiny, slimy and perfectly formed.

(side note: meaning behind the name. Reeves had just gotten a role in an upcoming local theatre musical called Matilda. When I looked up what that name meant, it felt right for this little survivor duckling.

Matilda (Tilly for short) means “mighty in battle and warrior” according to Wikipedia. 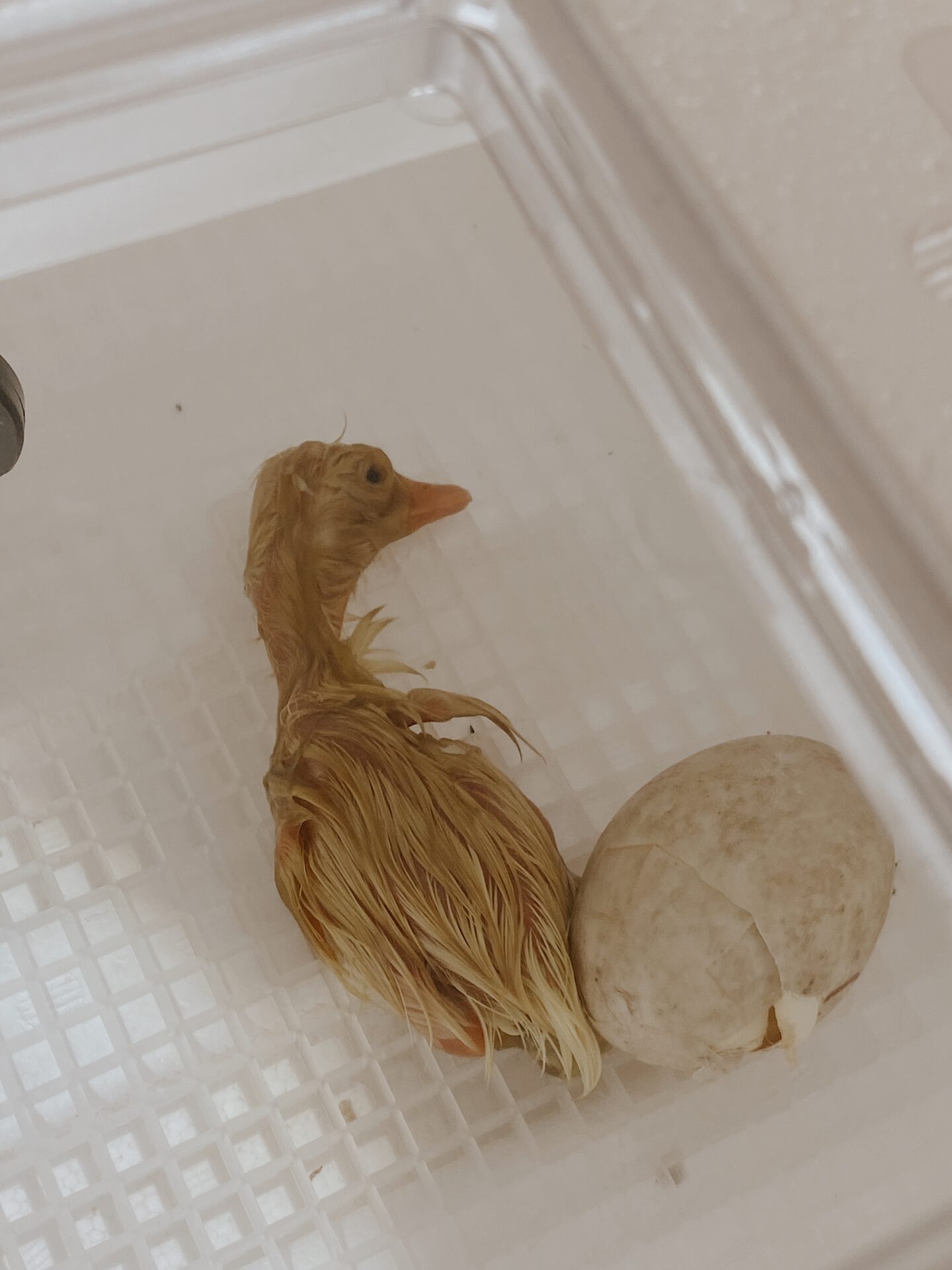 And so initially I thought we’d just take care of her until she was feathered up a bit and could join the other ducks at the pond. But, the imprint had been made and I think Tilly thought I was her momma right from the start. So after weeks spent together during quarantine here at home, she just kind of became ours, so to speak. Pete eventually conceded and let me win BECAUSE HE ROCKS. (Love you, babe!)

So I thought I should join a Facebook Duck owner group of some kind and try to get a handle on this duck-owning business, which I did and learned some valuable info about raising healthy ducks. She thrived and continued to grow and grow over the next couple of months. We did several photo sessions together and the girl is a natural in front of the camera, guys. Ha! Just look at that sweet expression on her face there below! 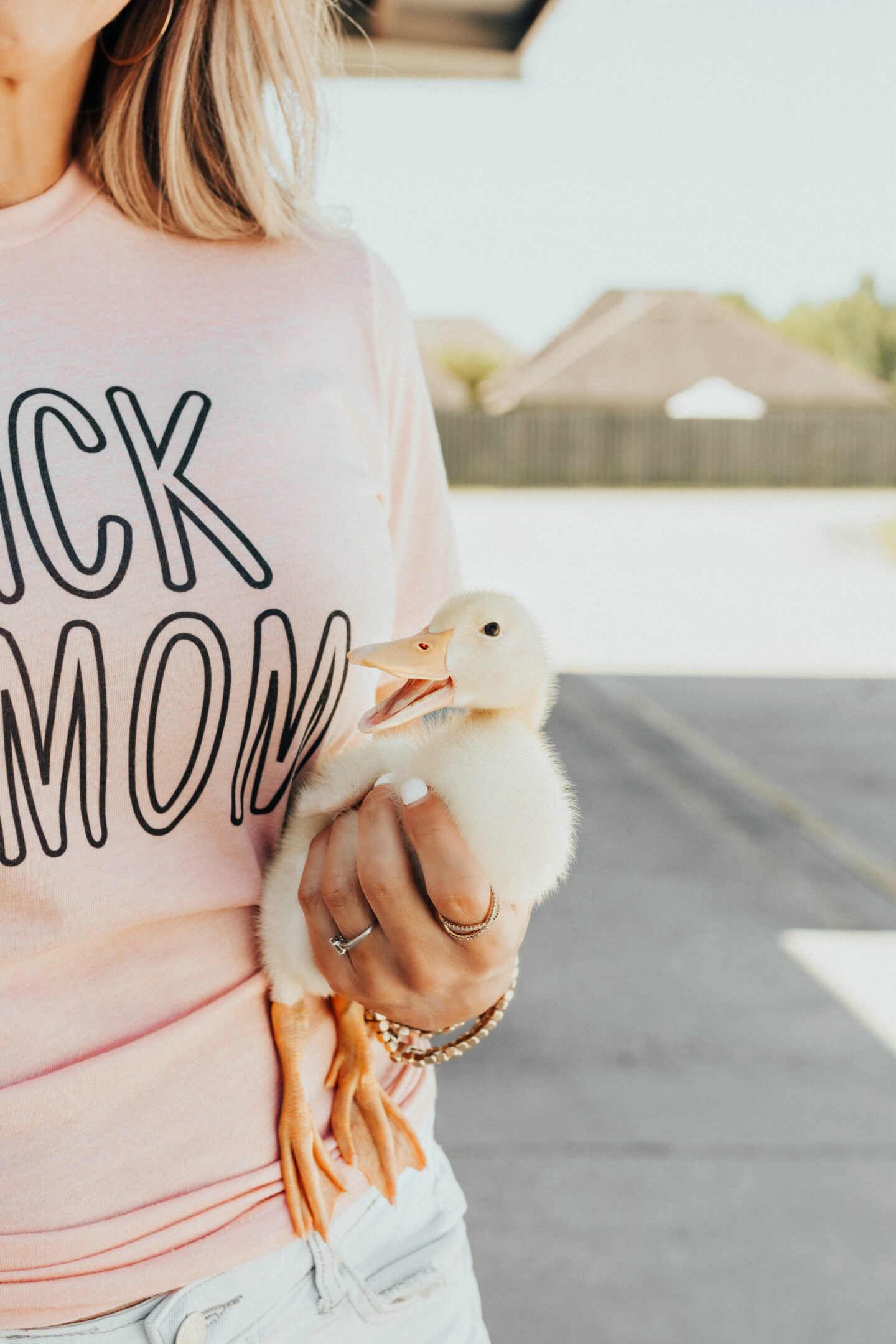 The Part Where 1 Accidental Duck Turned Into 3

So that Facebook group I mentioned? Yeah, I kept reading posts over and over again about how awful it is for ducks to not have other ducks to be around everyday. And so even though I thought I was some pretty dang great company for my new little bestie, I started to feel bad. Each day I had to leave her outside in her pool for the day alone, I had new parent guilt. ha! I started to feel like maybe she was a little lonely and let’s face it, I can’t exactly hang out there with her all day, everyday. I mean I love her, but I do still have a husband and two boys to look after and spend time with as well, ya know.

And so the search for how to get Tilly a couple of friends that were females began. I tried locally to buy a couple but no one would sex them (AKA check their internal parts to tell me what they were). And having male ducks was not an option. There’s no way I was going to get Pete on board with more “accidental ducks” via the natural method around here. lol So, I found a company that sells day old ducklings and you can pay a little extra for the females.

So that’s what I did. I bought some day old ducklings from California and they shipped those cuties to me here in south Louisiana! Talk about good mail day! The mail lady walked up to the door with a small box and said, “ummm….your package is chirping”. Ha!

So that’s how Dixie, Dolly and Tilly became the girl gang they are! It took a couple of weeks for Tilly to warm up to the idea of these two joining her space. In fact, I’m pretty sure she had it out for them in the beginning! lol But, she slowly started to get used to them and I think she enjoys the company. She kind of acts like the annoyed teenage big sister when it comes to “the twins”, as we call them. You know, that love/hate relationship thing? 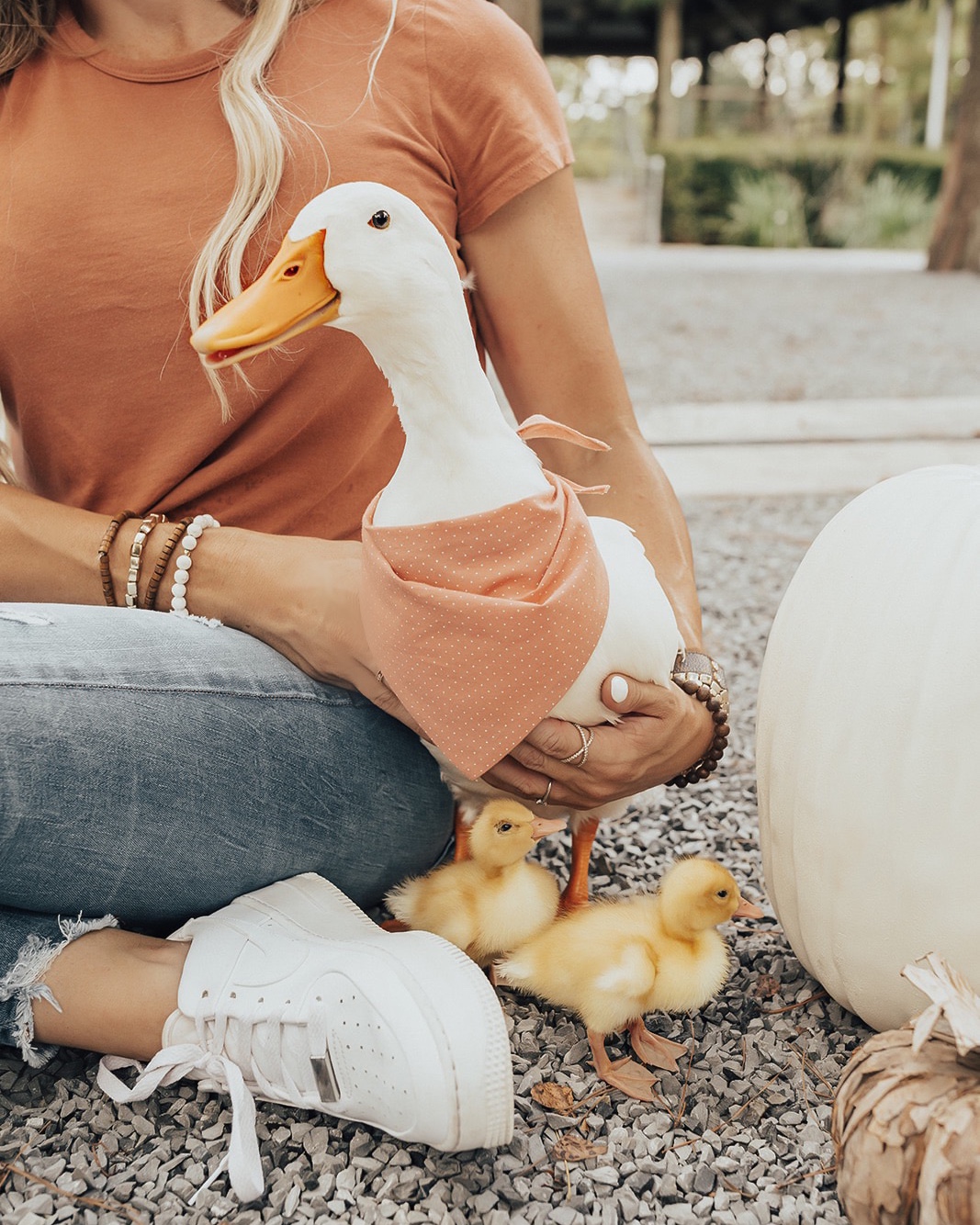 As far as personalities go (and I’m here to tell you that ducks definitely have different personalities!), Dixie is the quiet, stand-offish one and Dolly is my “big girl” who thinks she’s the spokesduck for the crew. She’s LOUD, ya’ll. Drives me nuts. If they want snacks, they send Dolly over to the back door to quack her head off til the treats arrive! lol

I know I’m probably not being a great #duckmom admitting it, but Tilly will always be my favorite of the three. It’s not just because she was the first. She honestly has THE sweetest disposition. I had no idea how loving and cuddly a duck could be until Tilly came along. She’s a special one for sure!

Some shots of the girls for Halloween and Christmas. Also, how cute is their pink coup? Pete painted it for them and it just reconfirms for me how great of a #girldad he would have made! He loves to spoil his girls (and boys)!

If you guys have any questions about my crazy duck life or recommendations on coup arrangements, food, etc. let me know! I’m happy to do another blog post sharing what has worked for us and what we’ve learned the past several months as duck owners. 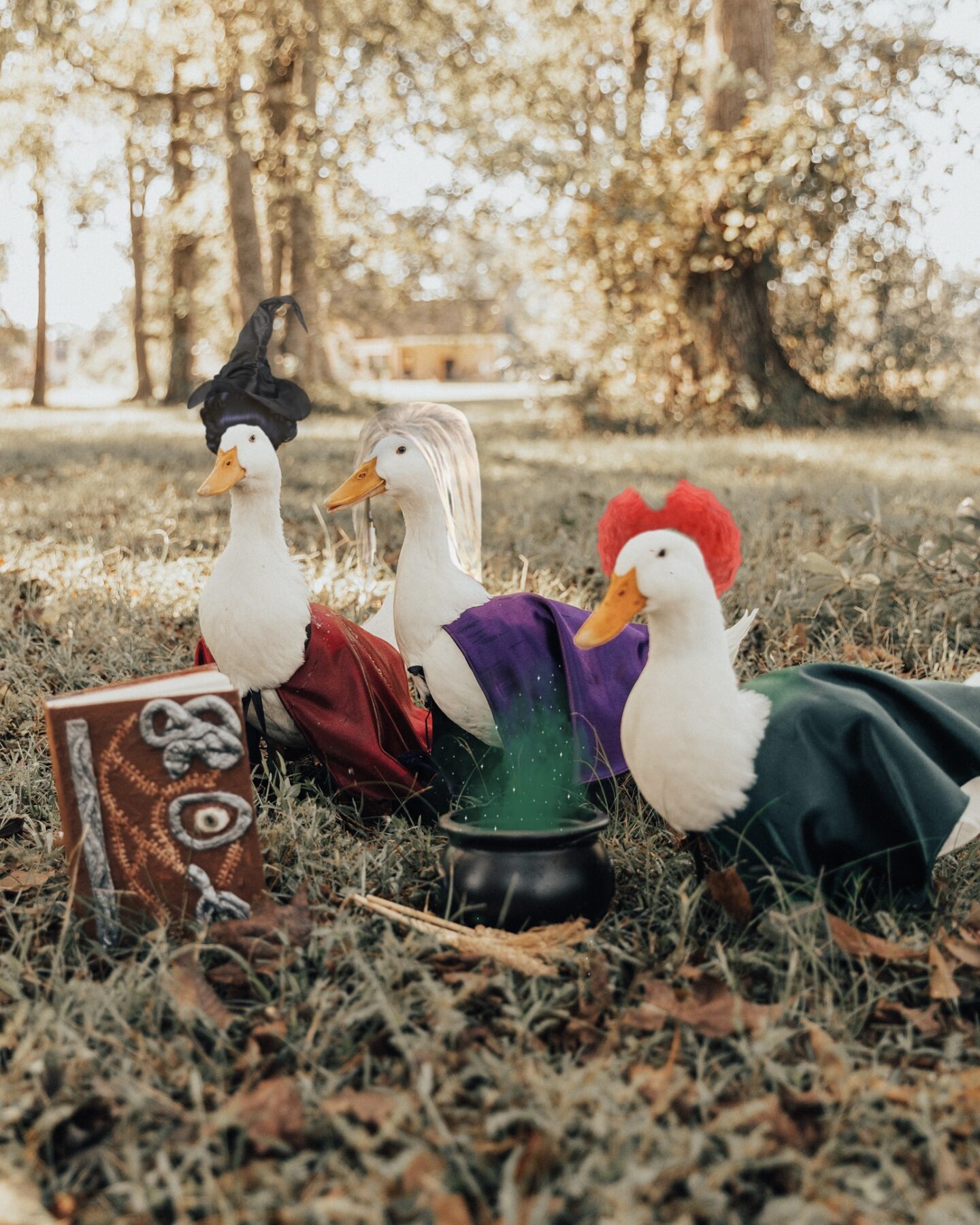 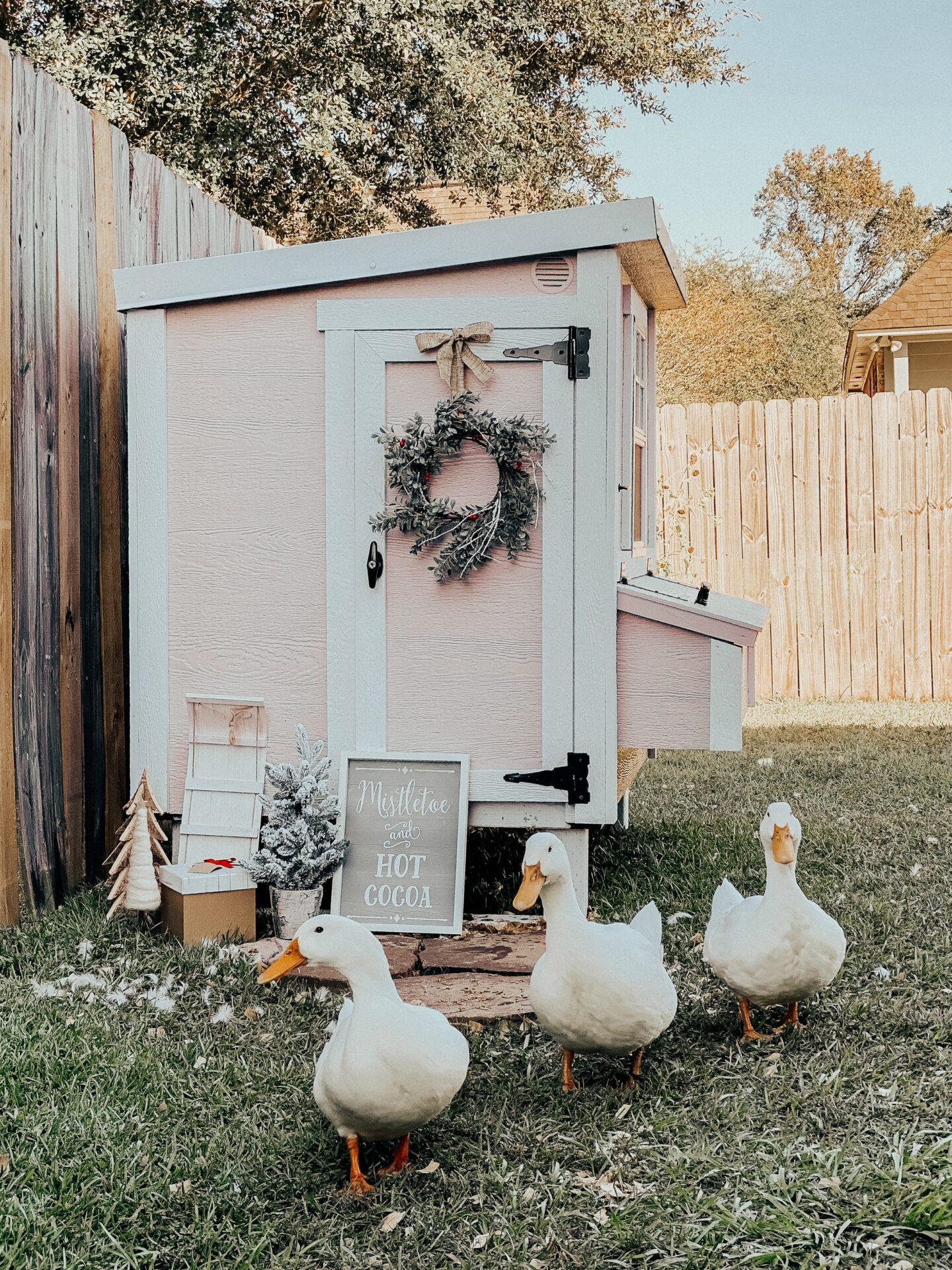 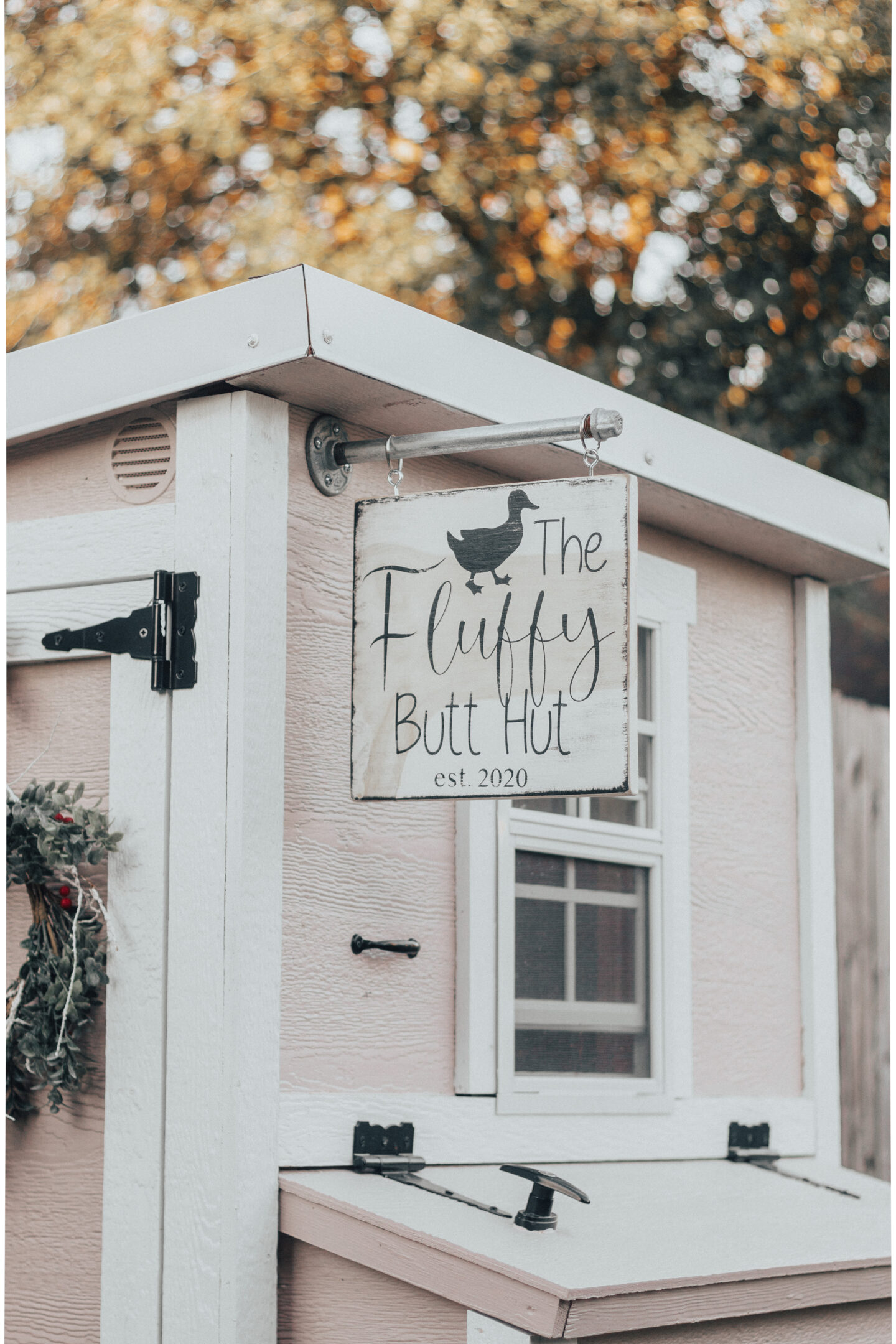 And lastly, with Tilly being such a big part of 2020 for us, it only felt right to include she and the twins in our annual Christmas card photos. Did the ducks (or the kids!) love it? Heck no! But, after trucking them over to the location by Jeep, chasing them around and putting bows on them, I’m happy we did it. Those photos make me smile, y’all. My hope is that they do the same for you guys who have followed along with our journey since the spring. Thank you for being a part of this duckmom journey with me!

Happy New Year, friends! Sending you lots of love into 2021! 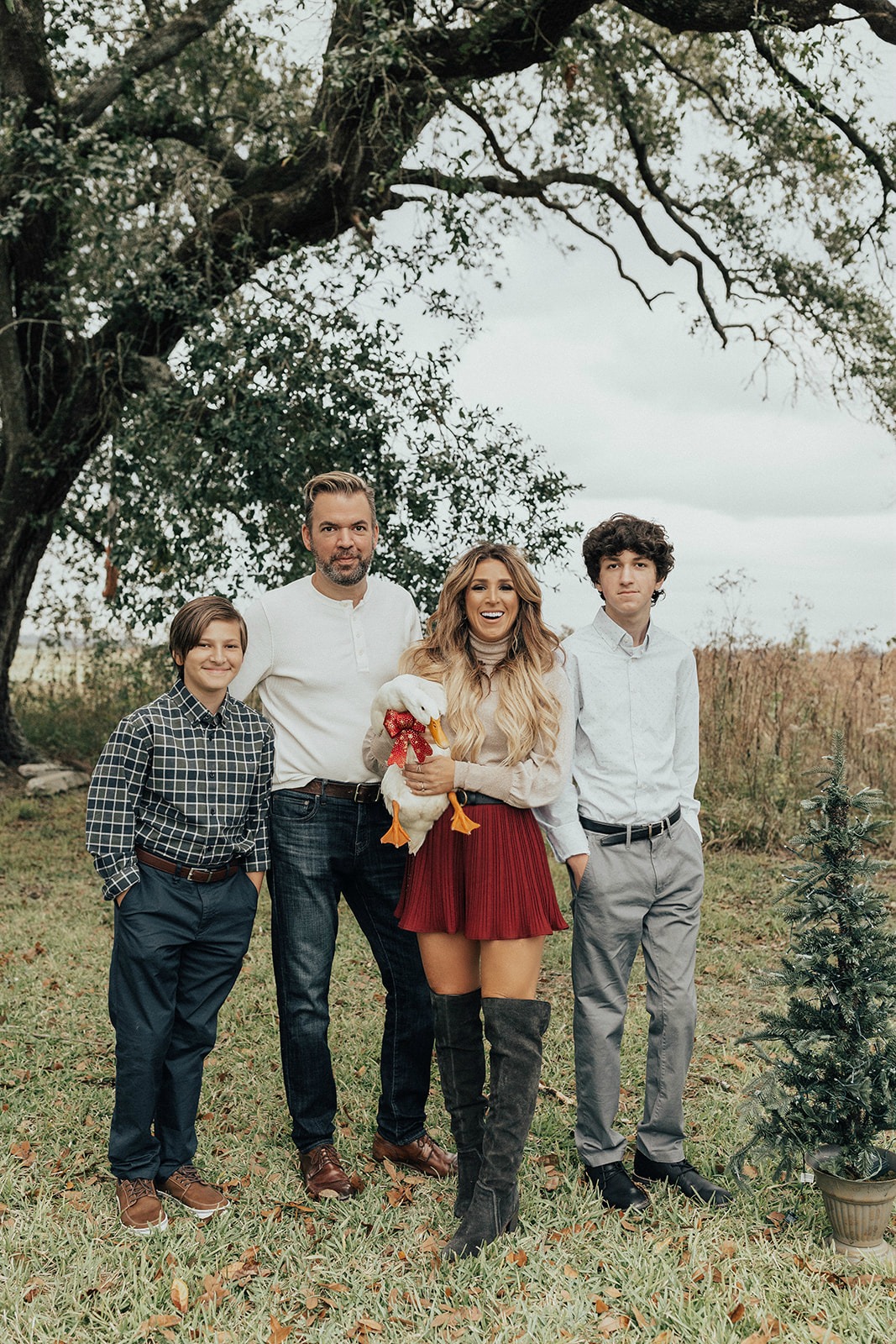 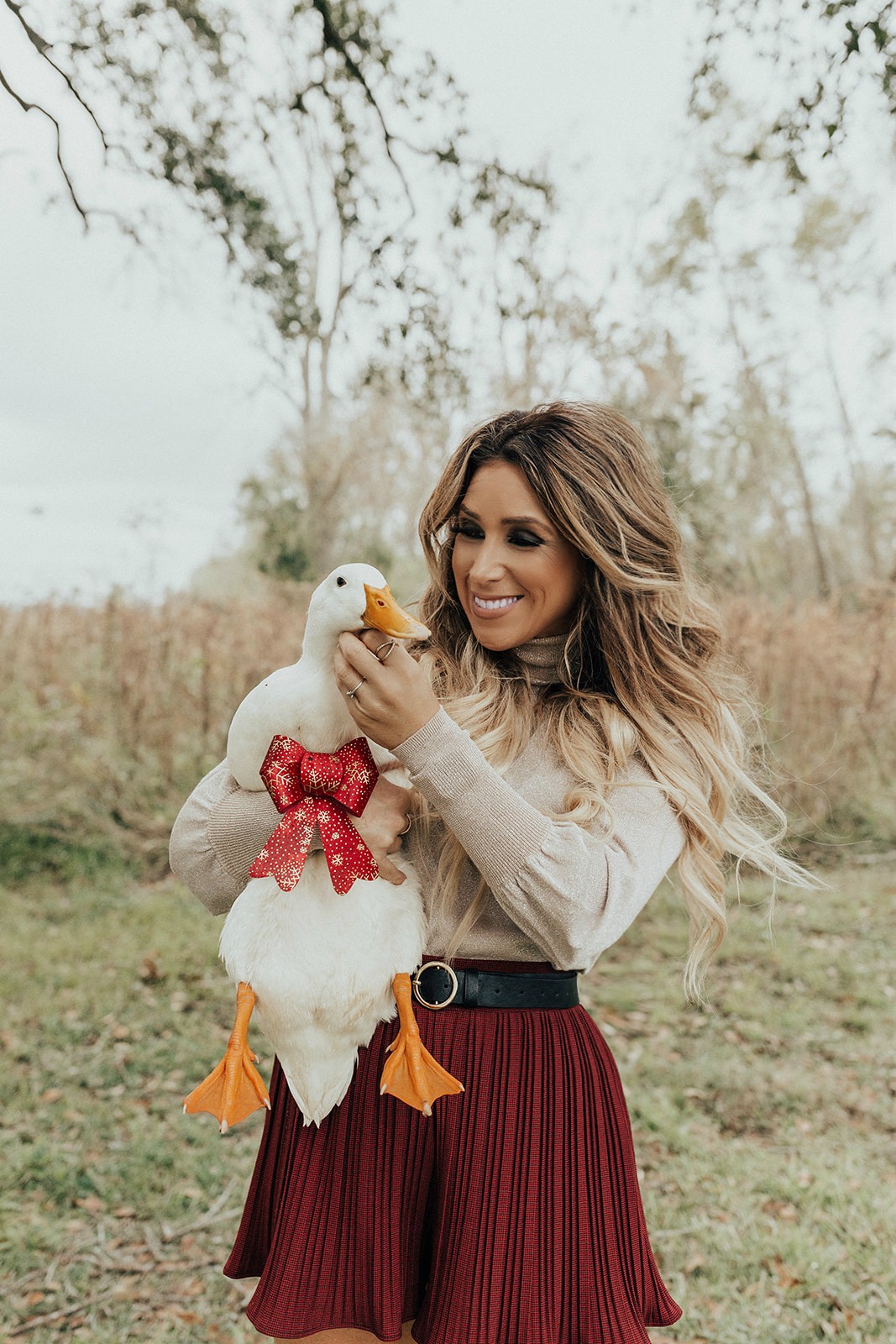 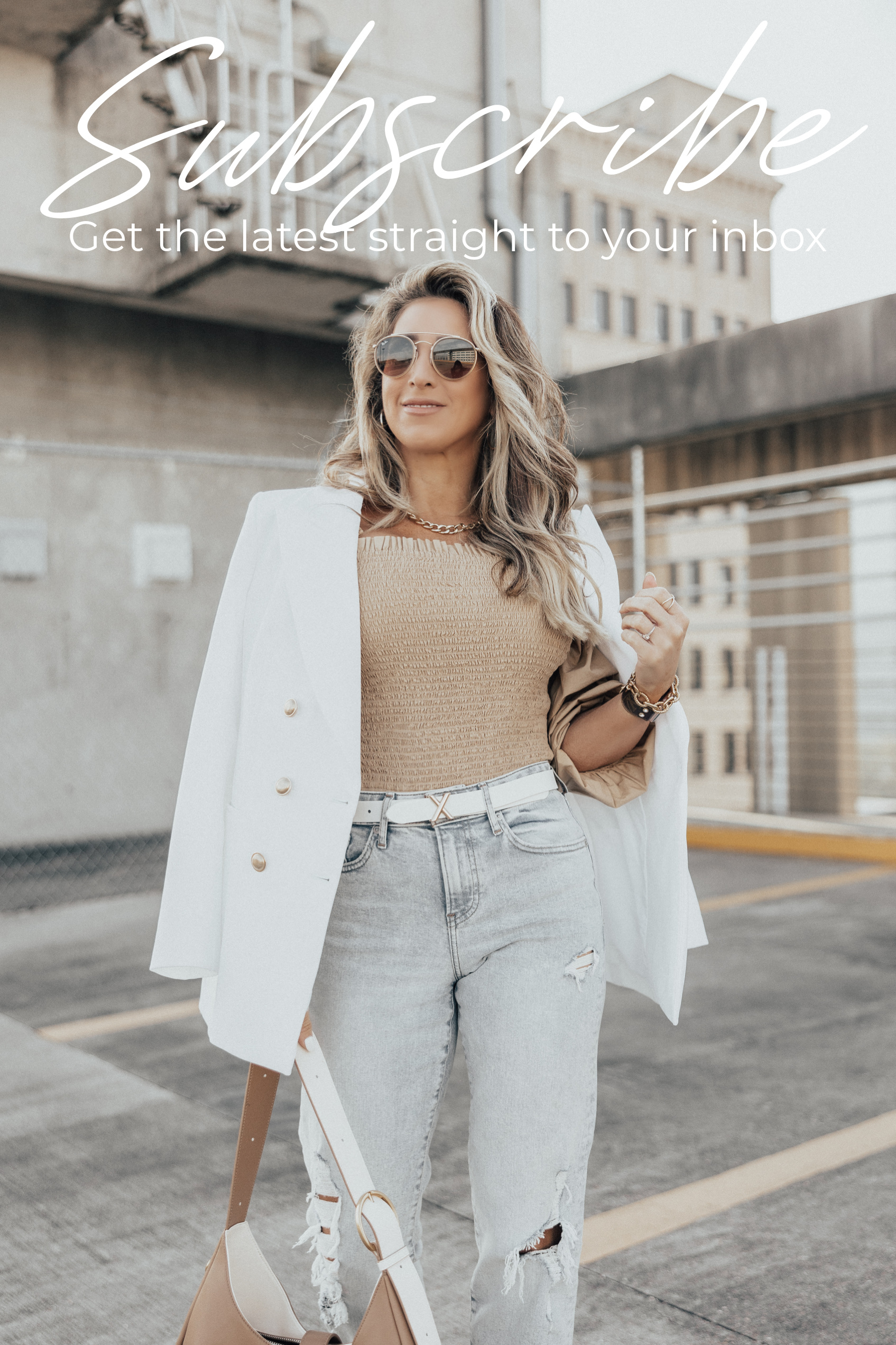 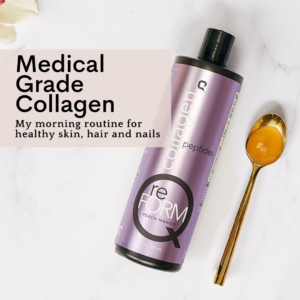